The Moai statues of Easter Island have always intrigued me. These giant heads were apparently buried up to their necks like a man at the beach buried in sand. Without much history to go on, only the artwork has survived to speak for itself. For this reason, the Moai are particularly mysterious.

Bodies under the earth with heads poking out of the dirt, peeping into the heavens, the Moai symbolize mankind’s connection with the universe and its different levels. While the body is rooted in the physical world, man’s mind is always reaching for the stars. The surface of the earth symbolizes the abyss, the great divide between the exoteric reactive mind ruled by its fleshly instincts, and the esoteric creative mind where everything is possible. A wise man once said “It is written, Ye are gods.” It would seem that without speaking, the Moai say the very same thing. 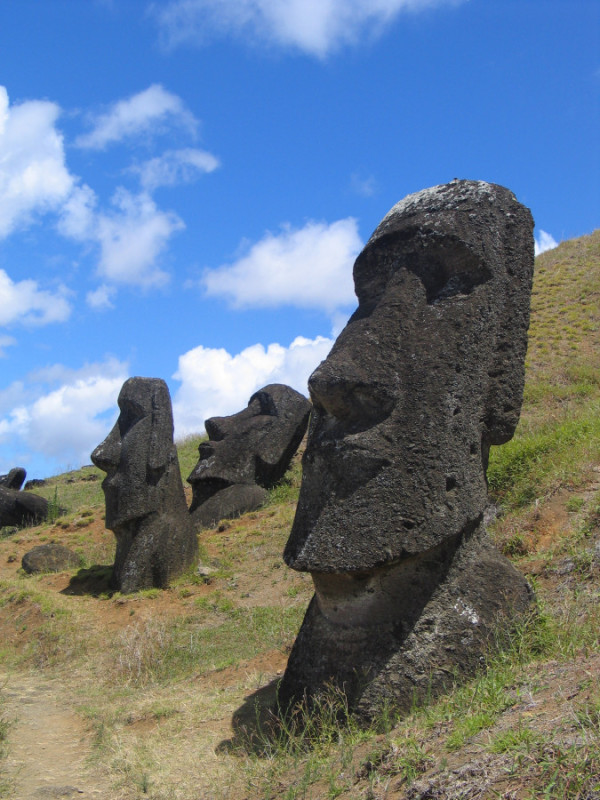 The Moai appear to have represented their people’s ancestors. Ancestors reverenced as giant stone idols, the inhabitants of Easter Island must have deified these statues in one way or another. Ancestor reverence and selective breeding certainly strike a chord in the heart of esoteric traditions such as Gnosticism.

The information age of the internet has blown people’s minds. While it’s been a long time coming, happening so suddenly inspired cognitive dissonance on a colossal scale. With misinformation everywhere, some people start to choose their own “facts.”  Suddenly, great prejudice is directed at “racists,” without seeming at all ironic to anybody.  Racism is sometimes turned inward as we open our eyes to the hideous behavior of our ancestors. No matter what our forefathers or our parents have done, we must learn to forgive them. After all, we would not be who we are today, we could not even exist without them. We must learn from their bad behavior so we don’t end up repeating it. But to condemn our ancestors is to condemn ourselves. And worse, condemnation of our heritage is condemnation of God’s work and ultimately God himself — ironic behavior for a society whose religious ideals are to love one another and judge not.  To each his own.

Fortunately, the Moai statues were strong enough to survive their creators. These monolithic beings can tell their story. Some of these awesome statues occupy museums all across the planet.

Human society is like one large organism.  A society built upon the backs of slaves and the genocide of esoteric and indigenous peoples has a long and painful road to recovery.  Twisting history, people love to paint themselves as the good guys.  Every selfish thing that a body of people does must be explained away.  The worse the behavior, the more it needs to be justified.  Compelled by the reactive mind, a guy’s own problems are projected onto others when he wants to clear his own guilty conscience.

The witch hunts of the dark ages are a fine example of ignorance and mass hysteria at its worst.  It’s easy to see the current and recent trends of ethnic cleansing, segregation, the Holocaust, and colonization.  But what about the great European genocide of its own women?  The female gender was tortured into submissiveness by the church and its blind followers for centuries.

Any female who was strong and independent enough to think for herself was seen as a “witch.”  She had to be eliminated from society, sometimes tortured to death and confession at the will of God.  The dark ages caused about a fifteen century gap in the history of female philosophers.  A people which would purposely weaken itself by slaughtering its strong females would fundamentally seem to be completely insane.

The dark ages probably could not have inspired a more appropriate name.  We call those times the “dark ages” because we don’t talk about them or even think about them.  It’s like a dark family secret on a grand scale.  Now that we enjoy the luxuries these horrors have afforded us, we condemn others from our high horse. Condemnation begets more condemnation, and the cycle continues…

The witch hunts never ended.  In the collective consciousness of society, killing or locking up criminals is like sublimating them.  “Forgetting” about our traumas only magnifies their impact.  The subconscious is the place where our dreams are born.  Our demons congregate behind the clandestine walls of unawareness, and the subconscious mind directs our conscious living.  Criminals are in fact the ones who make the laws — the legislature essentially reacts to the imagination of society’s creative criminals.  If society would just respect and nurture its creative aspects, the seeds of criminality could easily be identified and put to a more constructive use.

Reintegration of our unwanted experience is the path to mental health, whether on the small scale or the large.  The way to stop repeating the endless cycle of abuse is to learn from history — not a twisted history of self-serving ethnocentric lies, but a truly holistic history that views humanity as one large family.

Manage Cookie Consent
To provide the best experiences, we use technologies like cookies to store and/or access device information. Consenting to these technologies will allow us to process data such as browsing behavior or unique IDs on this site. Not consenting or withdrawing consent, may adversely affect certain features and functions.
Manage options Manage services Manage vendors Read more about these purposes
View preferences
{title} {title} {title}